Hawaii vs Cancun: which resort to choose for your vacation

Although there are similarities - a mild tropical climate, gorgeous white beaches and 5-star hotels, each destination has its own distinctive features. In this article we will consider in detail the rest in each location, so that each of you can determine where to fly to rest - in paradise Hawaii or in Cancun, Mexico. 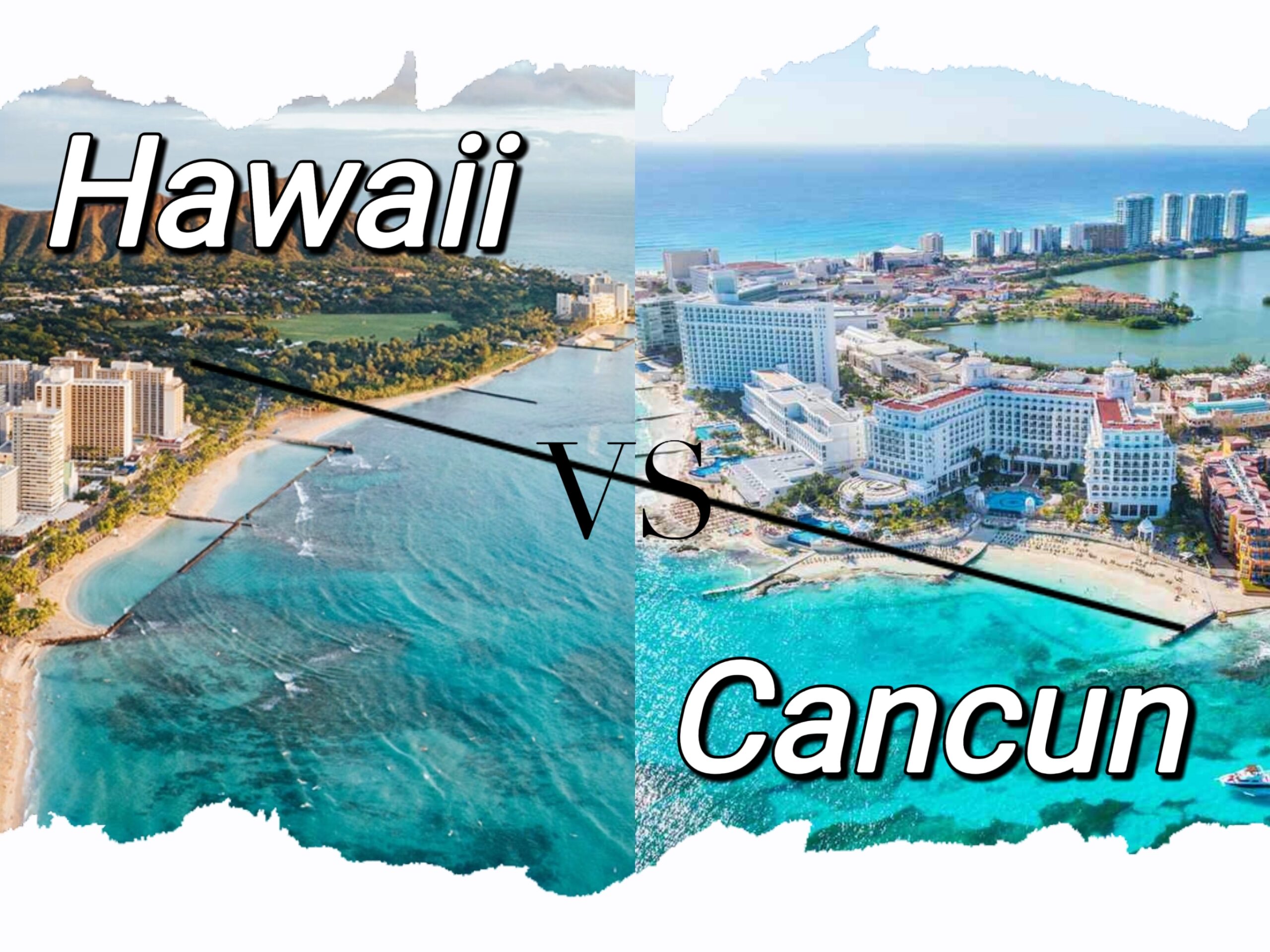 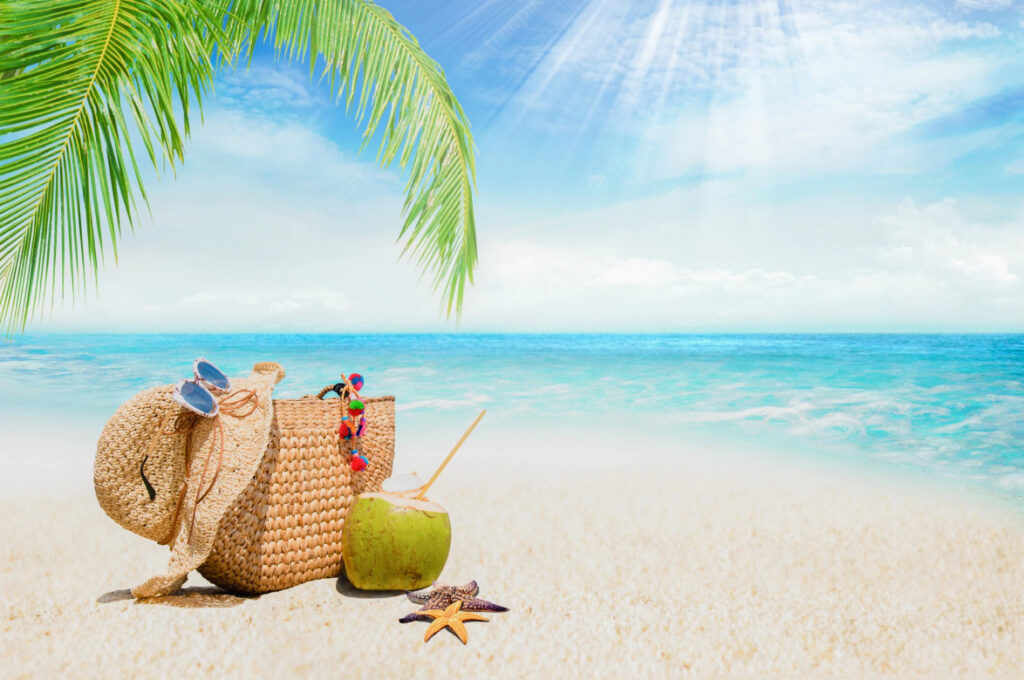 The Hawaiian Archipelago consists of 24 islands of volcanic origin, while only 6 of the islands are open to tourists. The largest of them is the island of Hawaii, which impresses with its nature and scenic beauty, as well as the other islands of the archipelago. The other islands – Oahu, Maui, Kauai, Molokai and Lanai are not inferior to the «big island» and in some respects even surpass it.

Mexico’s most popular resort, Cancun, is also famous for its snow-white beaches and turquoise waters of the Caribbean Sea. It is the beaches of Cancun that can often be found on desktop screensavers, symbolizing the dream of a perfect vacation in a paradise place.

Hawaii is a favorite vacation destination for Americans. It is the southernmost and youngest state in America – it became part of the United States only in 1959. Its unofficial name is the «Aloha State». The state has a total area of 6,423 square miles and includes 24 islands and atolls.

The islands of Hawaii, Oahu, Maui, Kauai, Molokai, and Lanai are ready to welcome tourists all year round. These paradisiacal places are stunning for their beauty, nature, and white beaches. They are located in the central Pacific Ocean, 2,299 mi off the U.S. coast in the Hawaiian-Aleutian time zone.

The capital of Hawaii is Honolulu, but there are other major cities on the islands – Hilo, Kaiula-Kona, Kaneohe. The most economically developed island is Oahu. All the islands have their own features – developed infrastructure, pristine nature and exotic jungle, fashionable hotels, diving, volcanoes and much more. Undoubtedly, every tourist in Hawaii will find a vacation to his liking.

Cancun is rightly considered the resort capital of Mexico, because it was here stretches a sandy spit of beach length of 19 mi and a width of almost 0,3 miles. Cancun’s beaches are washed by the warm and clear waters of the Caribbean Sea and Nichupte Lagoon.

It is for the beach holiday here tourists come, although you can find there and active pastime – fishing, diving, tours to the ruins of the Mayan civilization.

Cancun is a young city – it was founded in 1971 at the initiative of Mexican travel agencies, which were looking for an ideal place to build a resort. The famous resort has grown literally before your eyes, and now you can see the high-rise 5-star hotels along the entire coast. The city is located on the Yucatan Peninsula, on its east coast, in the state of Quintana Roo. It is part of the municipality of Benito Juárez and the Riviera Maya tourist area.

Cancun is divided into two zones – Zona Hotelera and Cancun City, or Downtown as the locals call it. The first part is home to numerous hotels on a sandy spit of the Caribbean Sea, while the second part is inhabited by the hotels’ service staff. The hotel area is famous for its chic hotels and high prices, in Downtown you can go to visit the local markets, bars and enjoy the authentic Latin American atmosphere.

Hawaii or Cancun: where is cheaper? 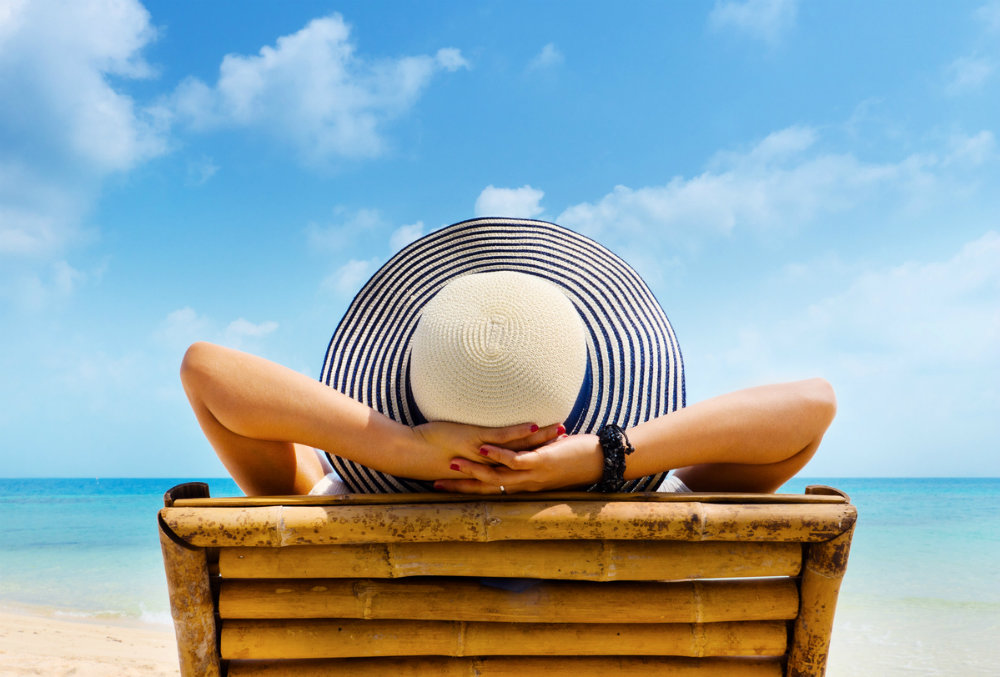 When choosing a resort for a vacation, a lot of them are concerned about the question – where you can rest cheaper? Of course, it all depends on the budget for the trip, but let’s try to figure out where the rest will be cheaper – in Hawaii or Cancun.

Cancun is no longer as expensive a resort as Hawaii. This is due to the large flow of tourists, as the Mexican government promotes tourism in the country. The city’s main attraction is the Downtown area, where you can eat in local cafes where the prices are much lower. 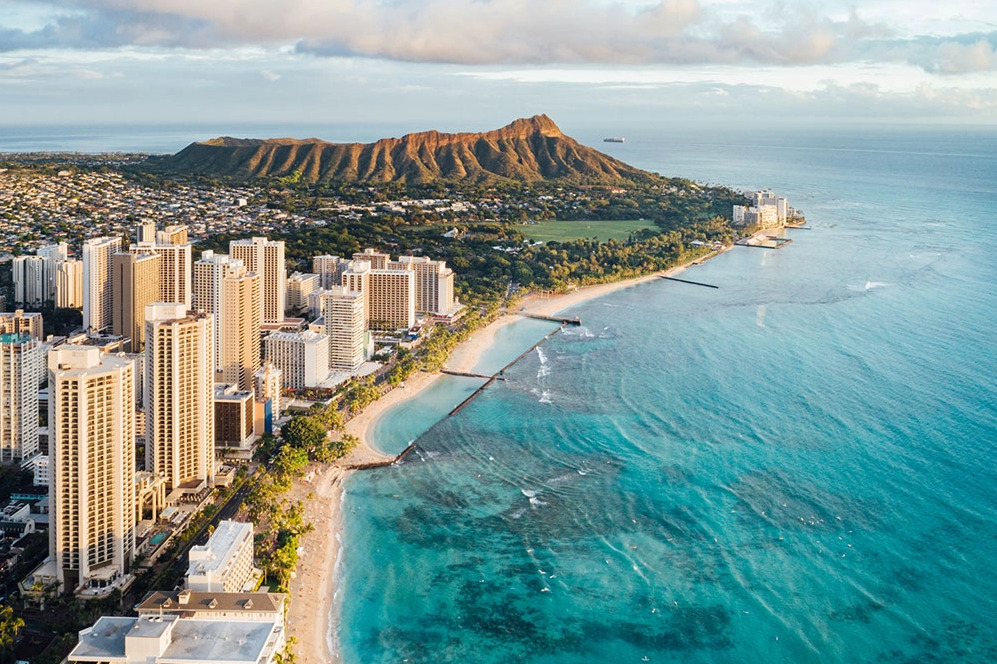 Hawaii receives most of its rainfall from October through April, so the tourist peak is from May through September. Temperatures during the summer months usually do not exceed 82 °F during the day, and the wind blowing from the Pacific Ocean softens the heat and makes the vacation quite comfortable.

The tourist peak in Mexico is considered winter and spring, but you can come to Cancun at any time of year, as there is not much difference between high and low seasons. Winter and early spring are best for families with children, as the sea is calmer during this time. But in Hawaii, it is best to go in the summer months, although even in winter the temperature on the islands does not drop below 72 ° F.

The best time to visit Hawaii is during the summer months, and in Kanuna, the peak season is in winter. 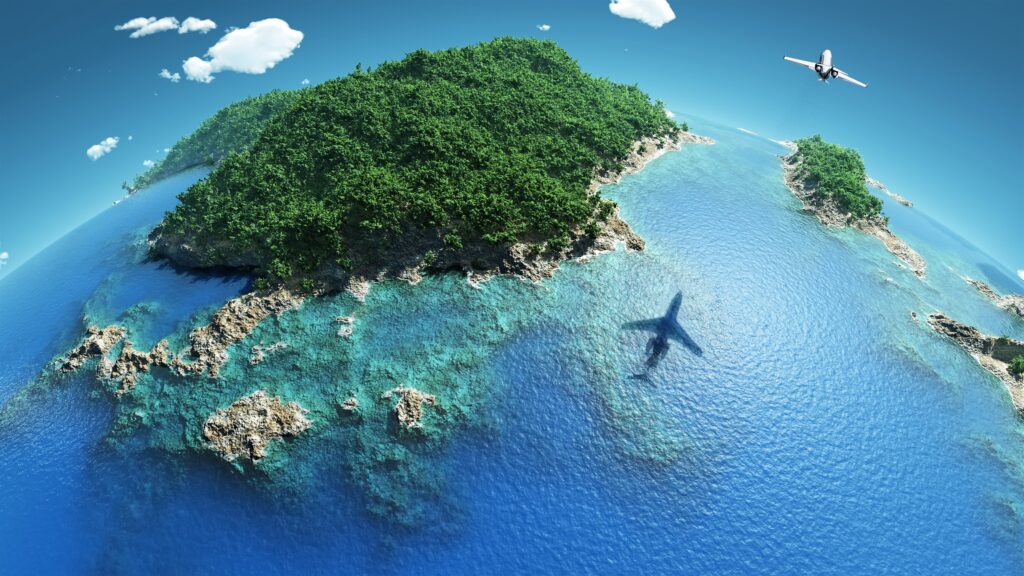 Hawaii and Cancun are quite far from Russia – you have to fly there for a long time and with connections. However, despite this, there are still many who want to visit these remote resorts.

How to get to Hawaii:

How to get to Cancun: 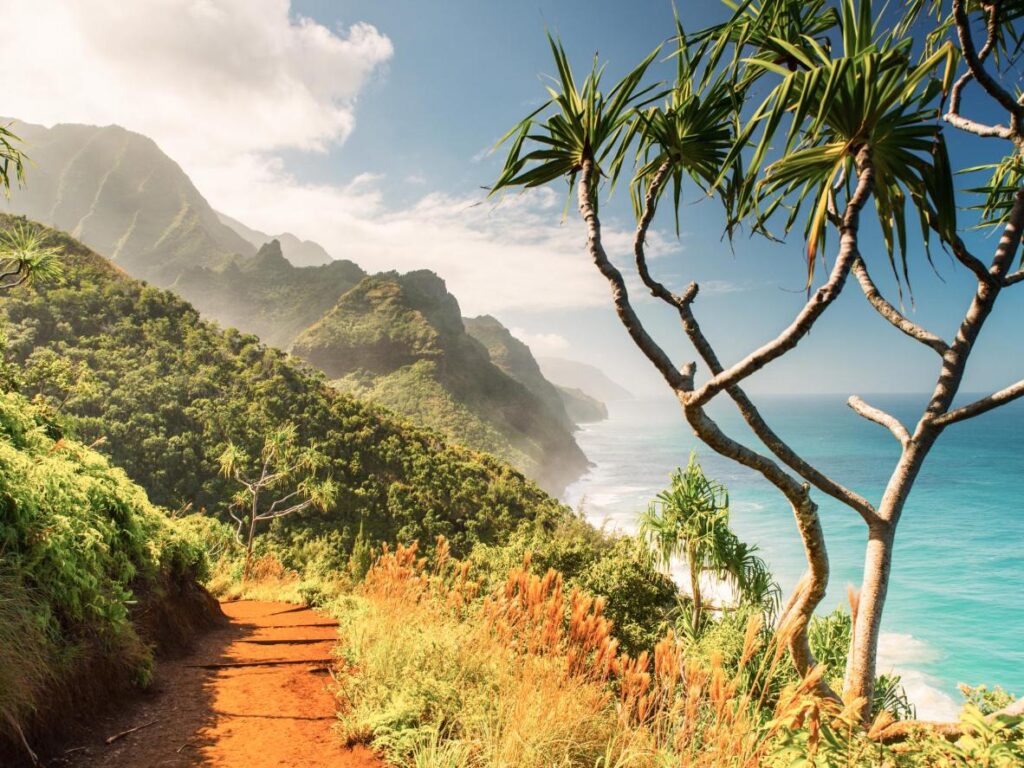 Hawaii is a real jungle with exotic plants and animals.
Cancun is an urban city, but there is also a lot of vegetation. 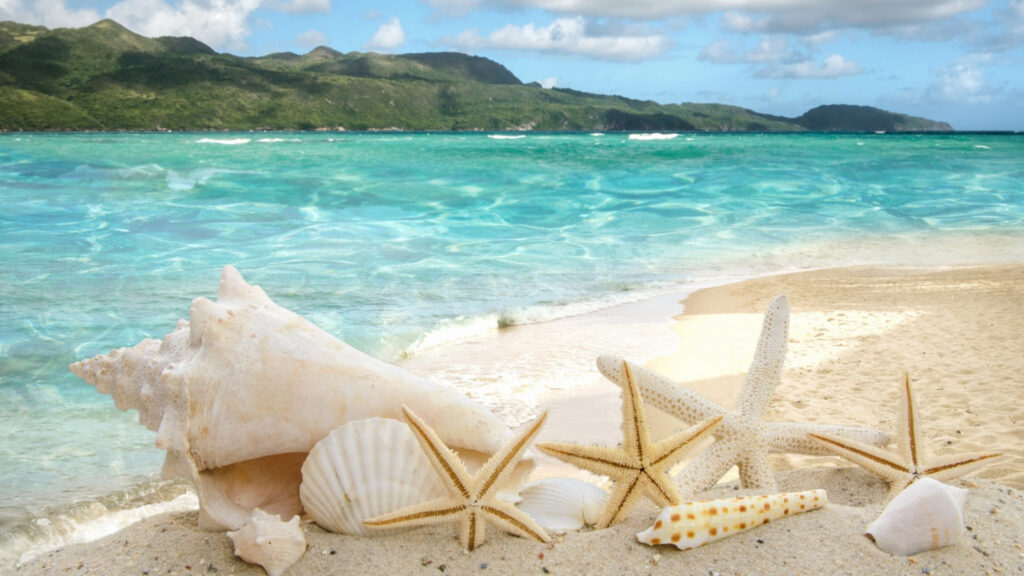 Hawaii’s beaches are incredibly beautiful and varied – there are well-kept beaches near luxury hotels, as well as secluded locations for those who like peace and quiet. However, absolutely all the beaches are public.

The number of beaches in Hawaii is in the hundreds, so in this article we will consider only the best locations:

Hawaii simply abounds with a variety of beaches, from urban to wild.
Cancun offers tourists fully equipped beaches with all the infrastructure.

What to do in Hawaii and Cancun?

Not all tourists come to the resort just to bathe in the sea and lie on the beach. Many are concerned about how you can actively and interestingly spend your time. The good news is that in Hawaii, that in Cancun you will not be bored, because there are a lot of active entertainment and attractions.

Hawaii is famous for a wide variety of water activities – diving, snorkeling, surfing, kayaking, parasailing. In Keilua Bay on Oahu, tourists can kayak and encounter green sea turtles and other ocean creatures. You can also kayak on the island of Kauai at Hanalei Bay before heading down the Wailua River. Maui and Hawaii also abound in kayaking spots. On the famous Waikiki Beach, canoeing is a popular local pastime.

Hawaii is a diver’s paradise, as the ocean water is warm and clear all year round and you can see exotic fish, rays, sharks, and dolphins while diving. The best places to dive are on the island of Oahu – Kahuna Canyon, Ala Moana Park, Hanauma Bay and Sharks Cove. On the island of Maui diving enthusiasts are recommended to visit the Molokini Marine Reserve, where you can see the unusual coral formations and various sea creatures. Kauai is also home to some of the best dive sites, such as Sheraton Caverns and Brennecks Ledge. And aspiring divers can take courses at one of the state’s dive schools and get an international diving license. 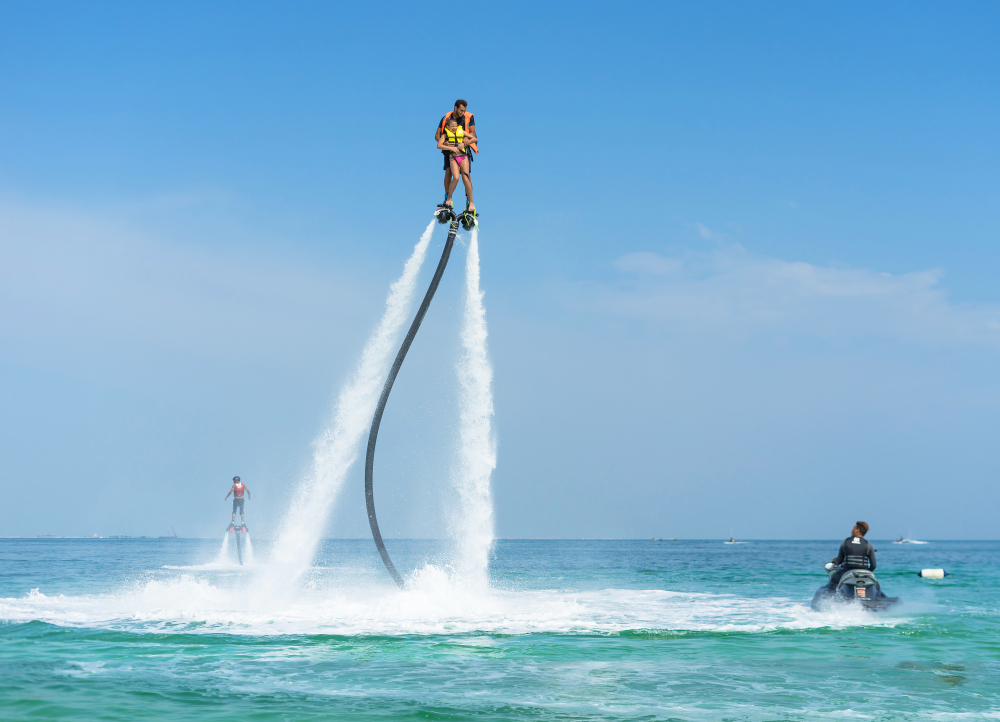 Cancun is also rich in a variety of water activities – diving, snorkeling, water skiing, motorcycling, wakeboarding, boating and surfing. For water skiing and wakeboarding, it is worth going to Nichupte Lagoon, where you can rent all the equipment. Diving enthusiasts can go to the island of Consumel to enjoy the breathtaking beauty of the coral reef Palankar. And in Cancun National Marine Park you can swim with whale sharks and dolphins. Surfers will find their paradise on the beaches of Gaviota Azul, Chak-Mol, Marlin, Ballenas, Delfines and Punta Nizuk. It is said that the height of the waves in these places surpasses even the famous waves in Miami.

Hawaii and Cancun offer tourists almost the same water activities – diving, snorkeling, surfing, kayaking, swimming with dolphins.
However, Hawaii has the largest number of coral reefs in the world.

Sports and activities in Hawaii: 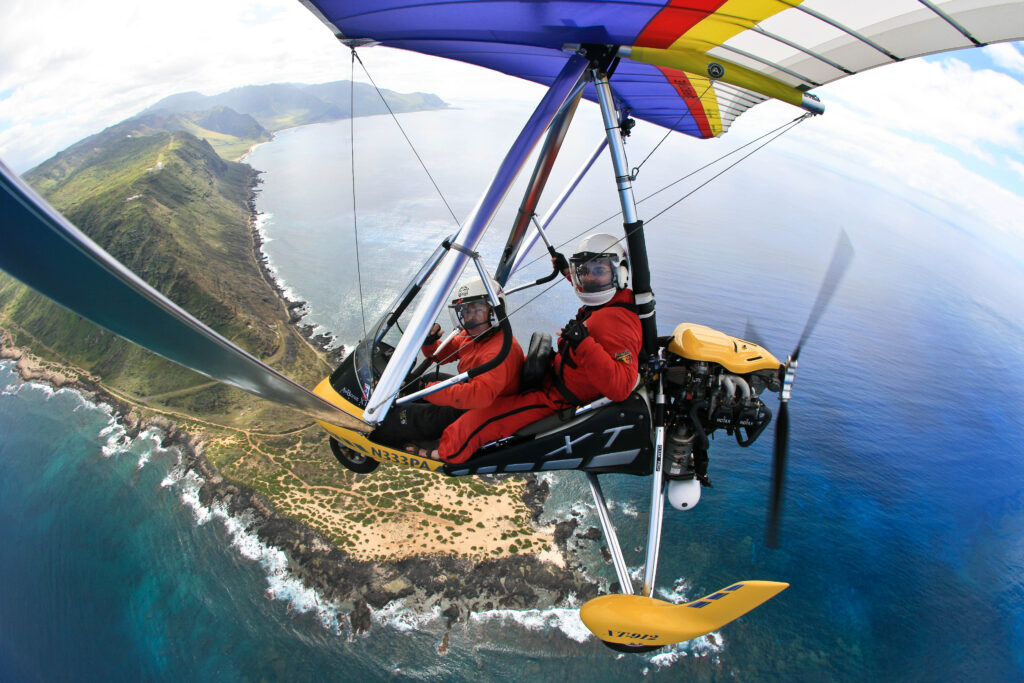 When flying to Hawaii, tourists can not only relax on the beaches and swim in the sea, there are also activities on land and in the air. One such activity for active tourists is hiking. Hiking is hiking on marked trails, and Hawaii offers trails for beginners and advanced hikers alike. There are excursions to Big Island Volcano, Kilauea and Haleakala. For those who want to see Hawaii from the air, helicopter tours are available. This exciting adventure will allow you to see at once all the sights, volcanoes, indescribable beauty of nature of the islands and will give unforgettable emotions.

Sports and activities in Cancun:

The active vacation in Cancun is also present in abundance. Tourists can sign up for a variety of excursions with local guides – bus, hiking and even extreme. For example, in the eco-theme park Schcaret on Playa del Carmen, tourists can swim with dolphins, go to the coral reef, see exotic butterflies, ride horses and rides. In the park Explorers waiting for rafting on the rivers in the caves, bungee jumping, off-road jungle rides, waterfalls, and more. And in Sevaltica Extreme Park you can fly over the jungle on a zipline and bungee jump into the waters of an underground lake. 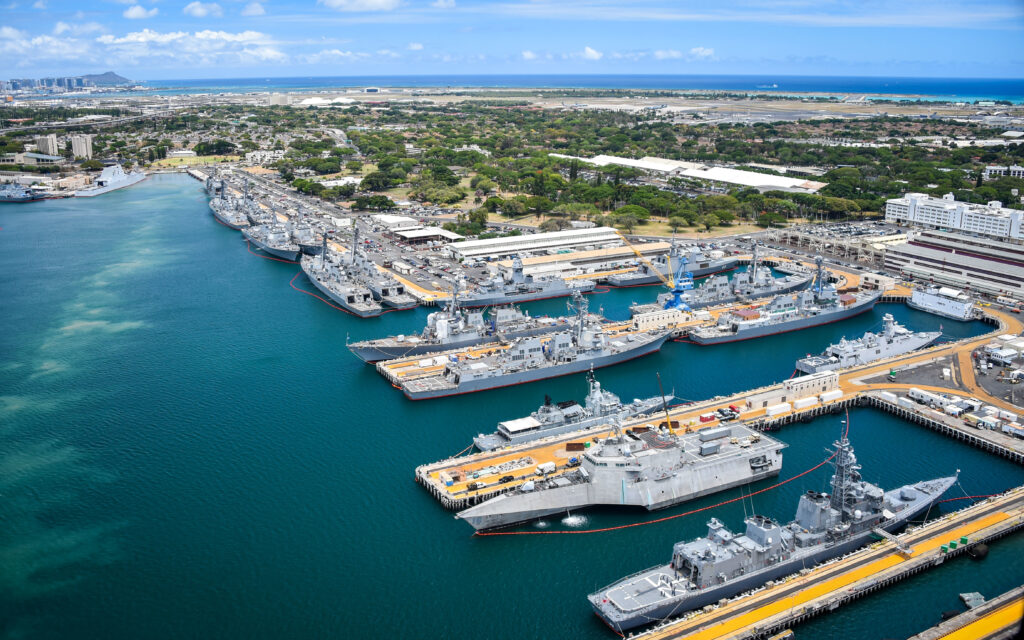 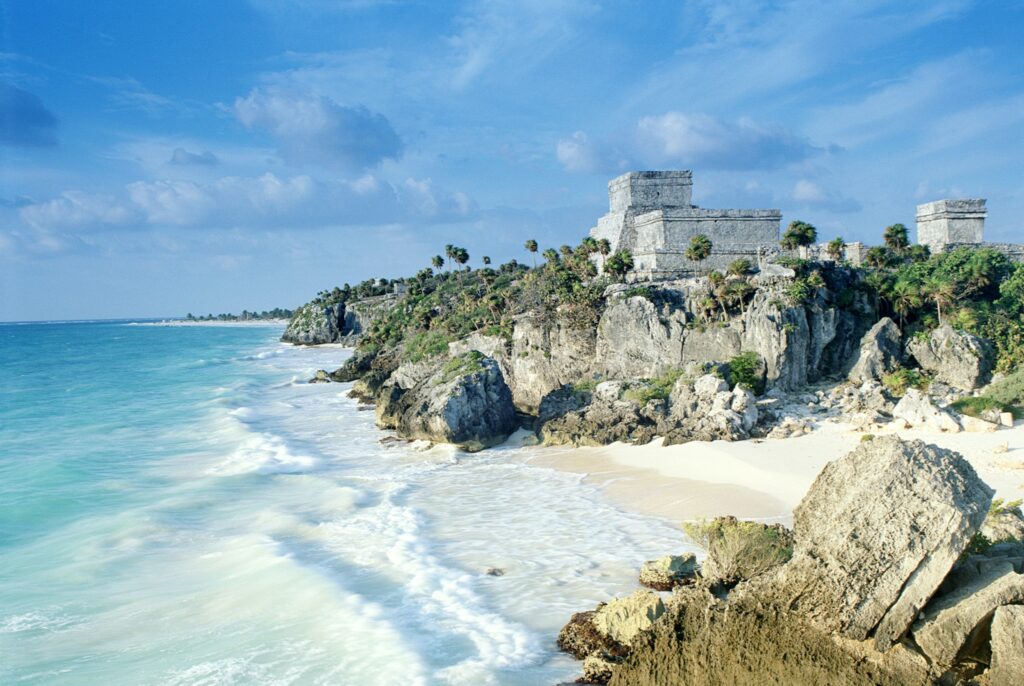 Attractions in Hawaii are scattered over different islands, so you can’t see them all at once.
When you arrive in Cancun, you can see the famous pyramids of the ancient Mayan civilization and underwater human statues.

Restaurants, bars, nightlife and other entertainment 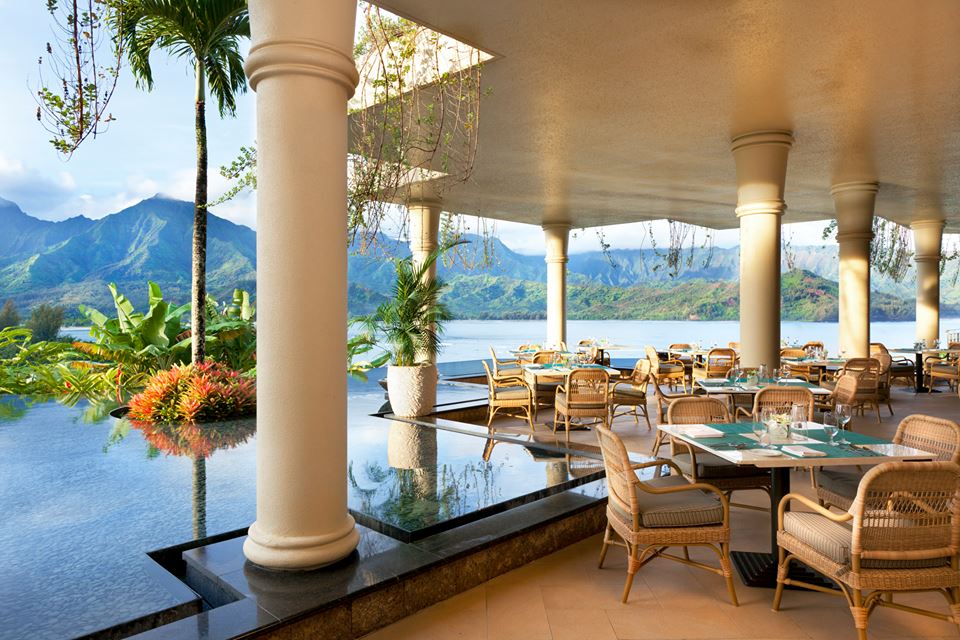 In addition to beach holidays, diving and excursions, the famous paradise resorts have other entertainment. There, as well as in other parts of the world, the nightlife is in full swing. Numerous restaurants, bars, discos and clubs will not give boredom lovers party all night long.

Hawaii offers tourists a variety of evening entertainment – from sitting in a bar or restaurant, to fire dancing and live music.
Nightclub lovers should go to Cancun, where the nightlife is nonstop.

Cuisine in Hawaii and Cancun 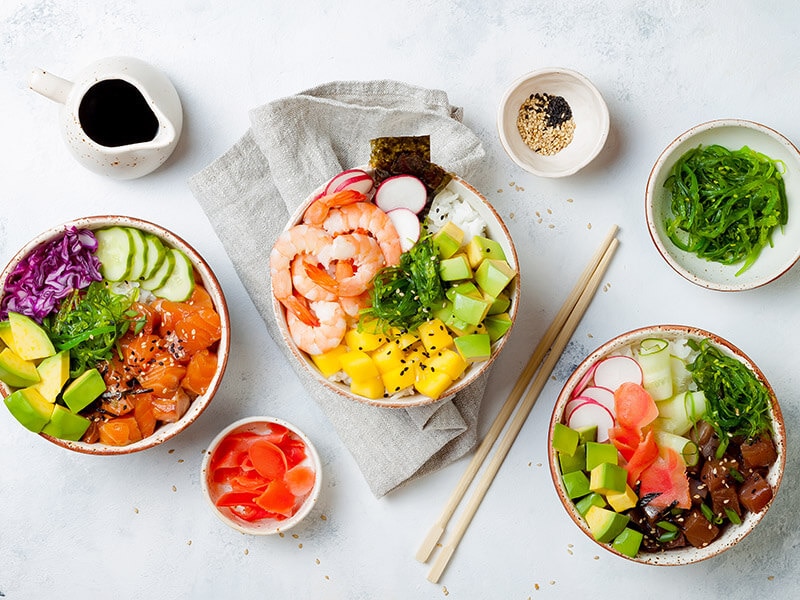 For dessert, we serve haupia, a Hawaiian coconut pudding with banana. Drink it all down with a Waikiki cocktail, which includes dark rum and guava juice. Also worth trying is kava kava tea, which has both a tonic and soothing effect. 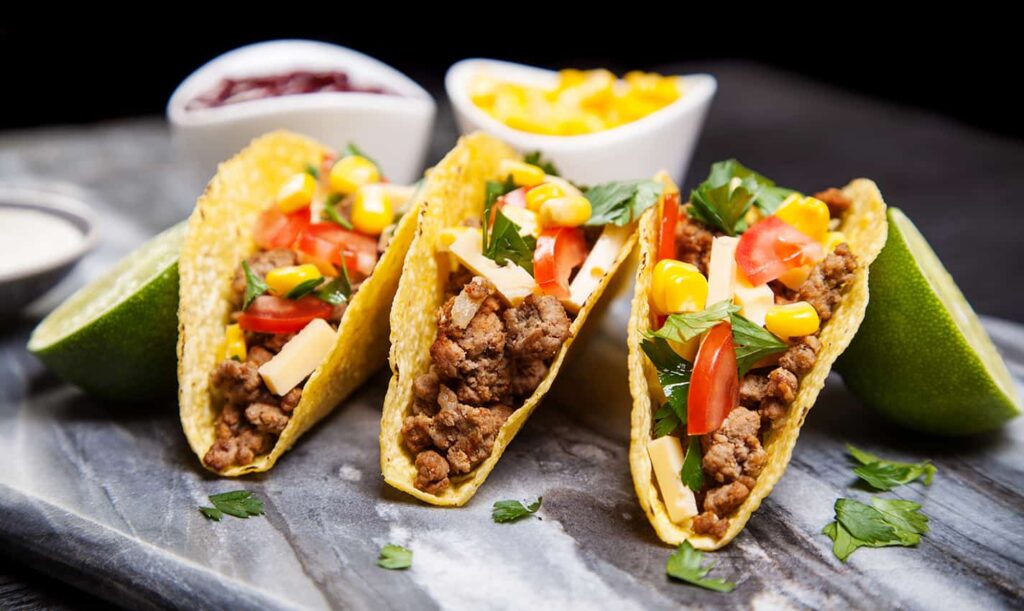 Soups in Mexico are a very hearty dish, usually made with meat, beans, corn, avocados, and radishes. This combination makes the soup very thick and filling, but also very spicy, due to the chili peppers.

As a street snack, Cancún serves burritos. The traditional tortilla is generously stuffed with fried stuffing, rice, beans, vegetables, cheese, and sour cream sauce. Mexican desserts include corn and pistachio cookies. Mexicans prefer lemonades and beer, while the famous tequila is drunk only in the evening.

At both resorts you can try the national local cuisine. The cuisine of Hawaii is rich in healthy foods, while the Mexican cuisine is rich in spicy meat dishes.

Features of vacations in Hawaii and Cancun 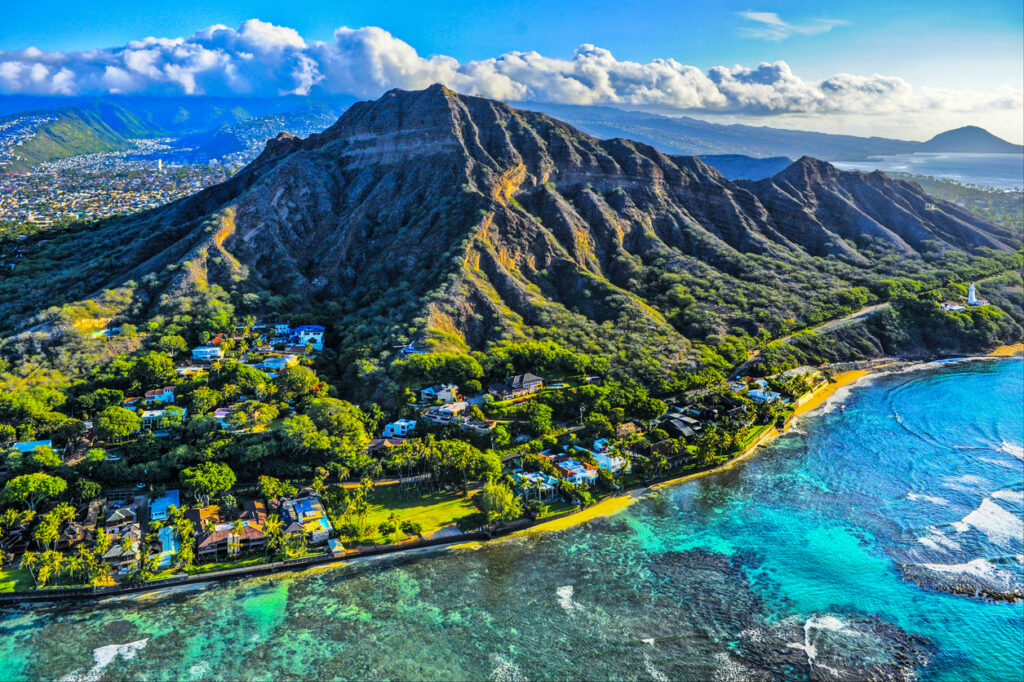 Both Hawaii and Cancun boast warm, mild climates, snow-white beaches and turquoise seas. However, they have their own distinctive characteristics.

Hawaii, on the other hand will delight tourists with an abundance of attractions, not everywhere you can see the volcano erupting and fly over it in a helicopter. Come to Hawaii for a week makes no sense, because during this time you will not have time to see even a small part of what these paradise islands offer. 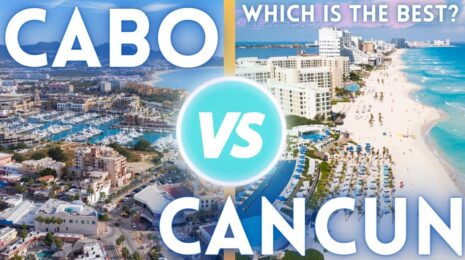 Cancun vs Cabo San Lucas: which resort to choose for your vacation
Read more 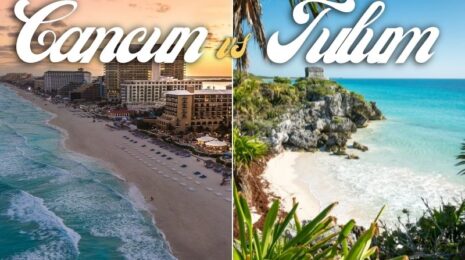 Tulum vs Cancun: which resort to choose for your vacation
Read more 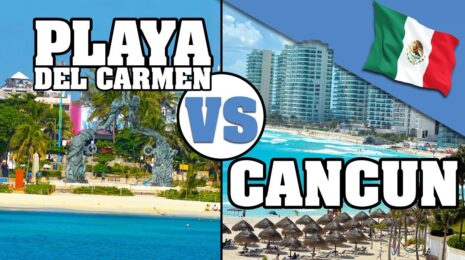 Cancun vs Cabo San Lucas: which resort to choose for your vacation
Read more

Tulum vs Cancun: which resort to choose for your vacation
Read more