Top things to do on Isla Mujeres

Isla Mujeres (Isle of Women in English), one of the most popular resorts in the Mexican Caribbean, was named the best island destination in Mexico and Latin America in 2022 by the World Travel Awards. Founded in 1993, the world-renowned award is given annually for excellence in international travel. With its picturesque beaches, luxurious hotels, and unique Caribbean atmosphere, the island of Isla Mujeres can rightfully be called the best island resort in Mexico. 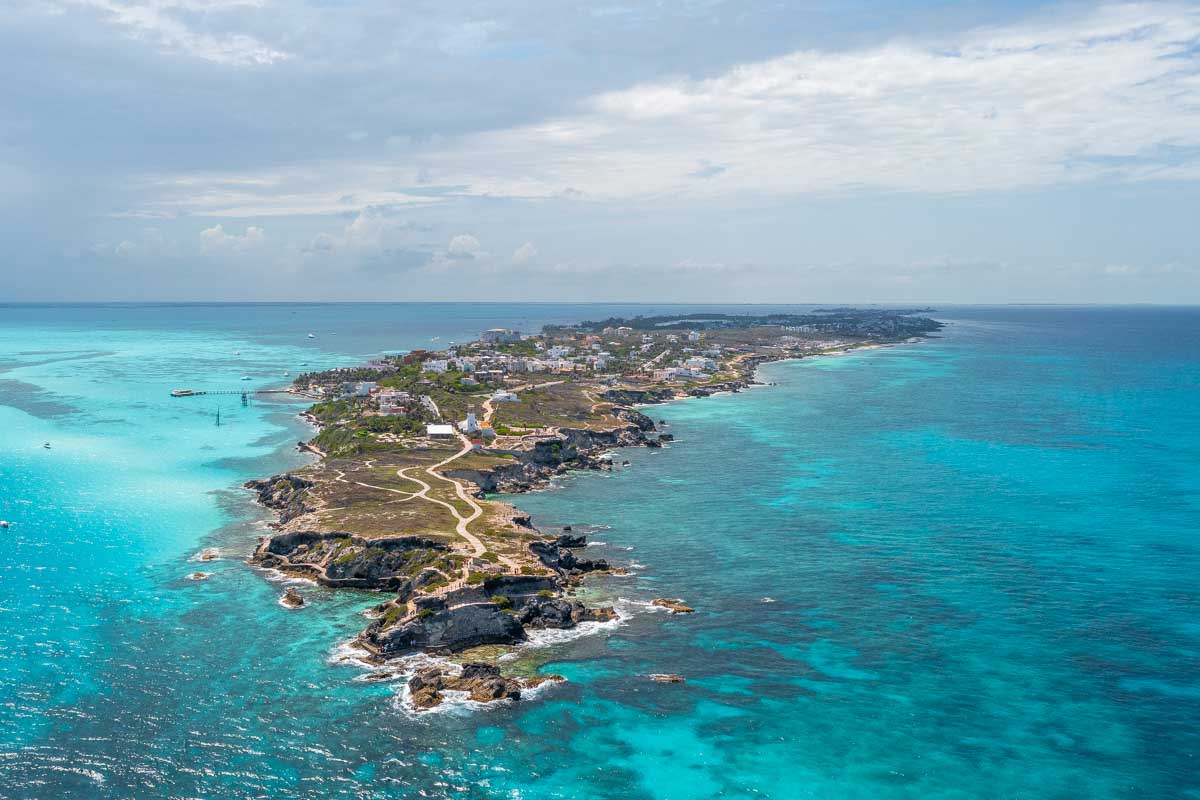 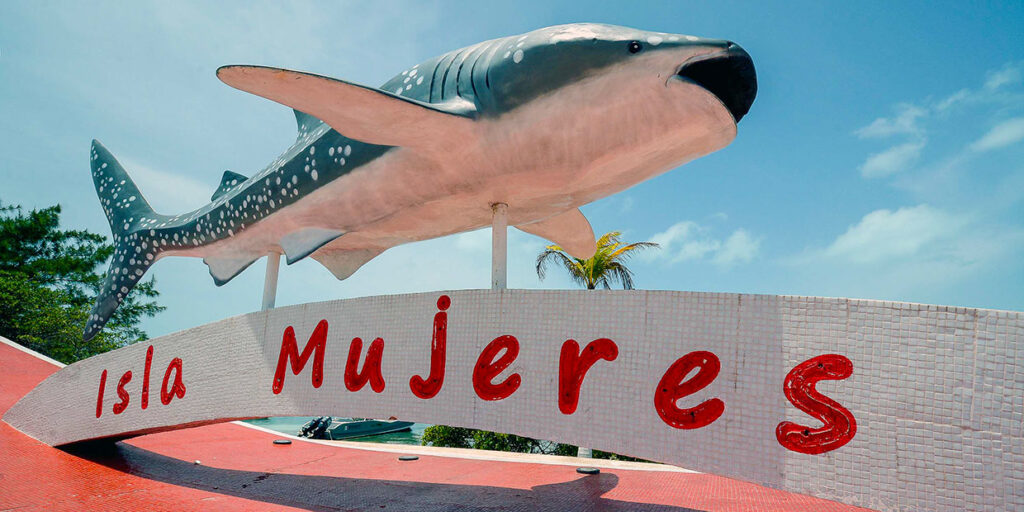 Located just 35 minutes by ferry from the Cancun Hotel Zone, Isla Mujeres offers unparalleled tropical beauty and some of the best hotels in the region. The island is also popular for its beaches, many of which are awarded the Blue Flag (prestigious environmental award), first of all, we are talking, of course, about the beaches of Playa Norte and Playa Centro.

The island’s restaurants prepare excellent cuisine, and the locals are friendly and hospitable. Even though dozens of large hotels are located on the island, there are also hidden places where tourists can hide from the hustle and bustle of crowded resort areas. Safety and cleanliness are two other important factors that have earned Isla Mujeres a high tourist award. 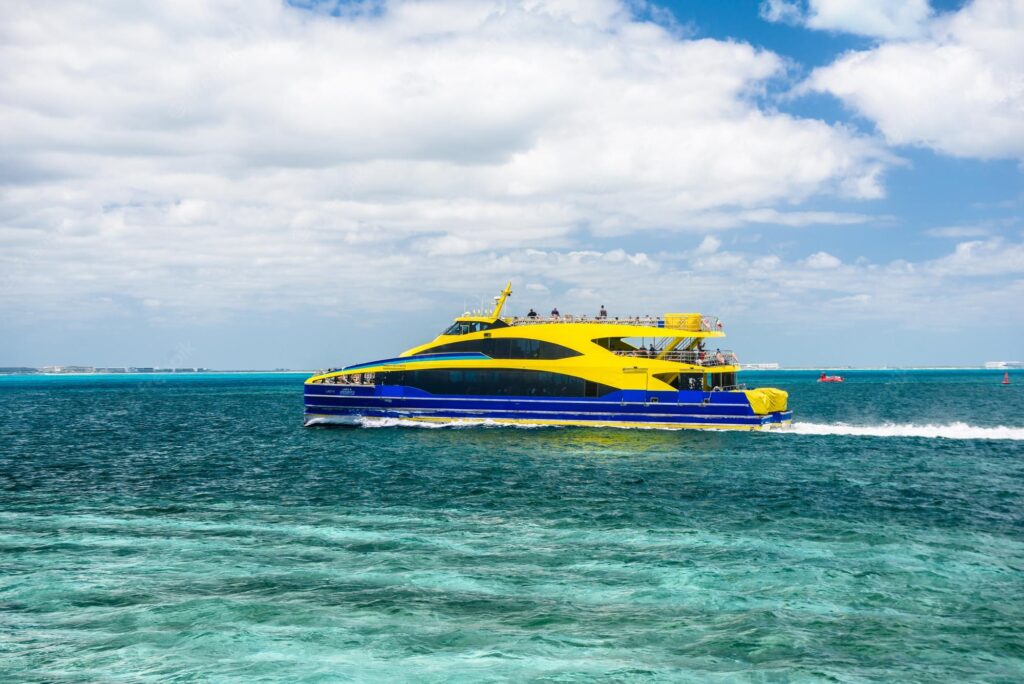 This is the first time the popular Caribbean island has received such a prestigious award. After years of investment in improving tourism infrastructure, the island’s efforts have finally paid off. In recent years, many of the local hotels remain fully booked throughout the summer. Many foreign tourists specifically choose Isla Mujeres for their holidays over Cancun or Playa del Carmen and the ferry transport tens of thousands of tourists to the island every month.

It offers first-class amenities, including private yacht transfers and award-winning restaurants. But there are also many budget hotels here, for those who are not ready to spend a lot of money to get a taste of a tropical paradise. 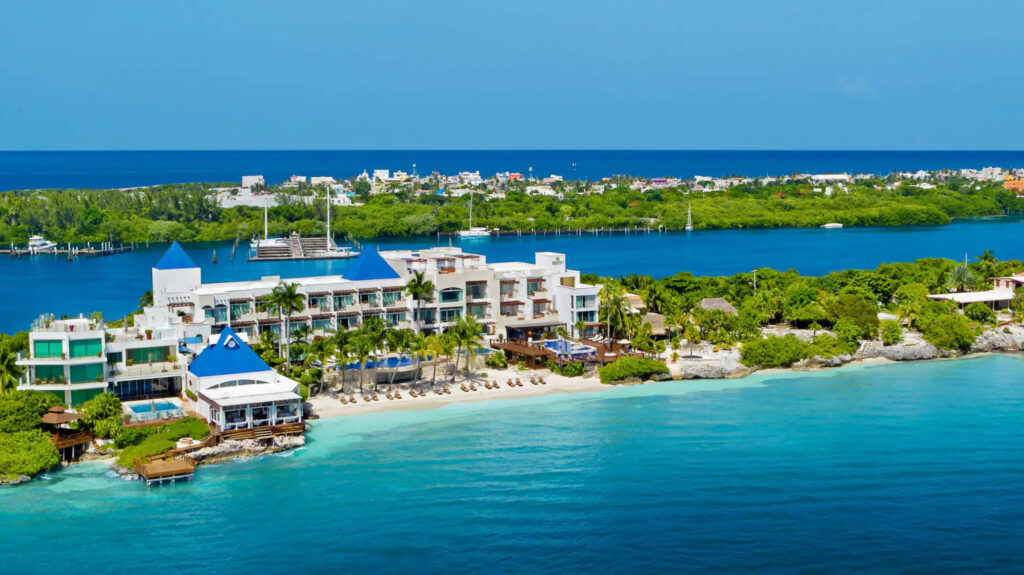 Many beaches in Mexico’s Caribbean mainland are often criticized during the summer months due to abundant algae infestation due to seasonality and undercurrents. Tourists especially come to the island, because they know that here they can choose any beach to relax.

History of the Isle Mujeres: 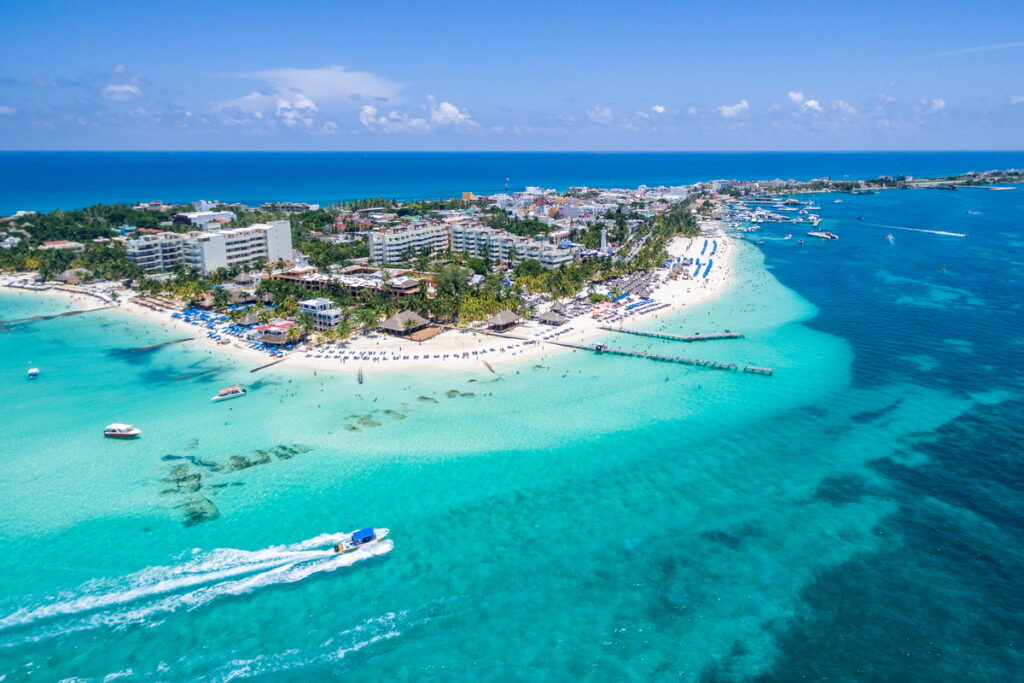 Isla Mujeres is partly located on an ancient coral reef, which, according to the most conservative estimates, is more than one hundred thousand years old.

The first traces of human presence here, according to archaeologists, date back to the beginning of our era: one of the found columns indicates the year 564. In the era of the Mayan civilization, which was well-developed for its time, the island was a sacred place.

At that time, Isla Mujeres was part of the Maya province of Ekab.

Salt was mined here, which was used, in particular, for the preparation of medicines.

Perhaps that is why the island was considered dedicated to the goddess of medicine and hearth Ixcel, a temple was pitched here in her honor. Until now, many buildings of that era have been perfectly preserved. 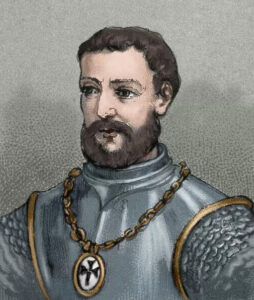 Thus the name of the island was born – the Island of Women or Isla Mujeres in Spanish.

The island was considered a real sanctuary of the goddess Ixcel – the patroness of the moon, fertility, and medicine. The Temple of Ixcel was located at the southern tip of the island and also served as a lighthouse.

Subsequently, a lighthouse was built on the island, and the first settlement was formed only in the 19th century. It was founded by fishermen who moved here with their families. An important role in the development of the island was played by the legendary pirate de Marcega, who built a hacienda on almost half of the island, from which local agriculture began. Fishing in Cancun on Isla Mujeres is still attractive, it not only feeds the locals but is also considered one of the most interesting activities for tourists.

What is there to do here? 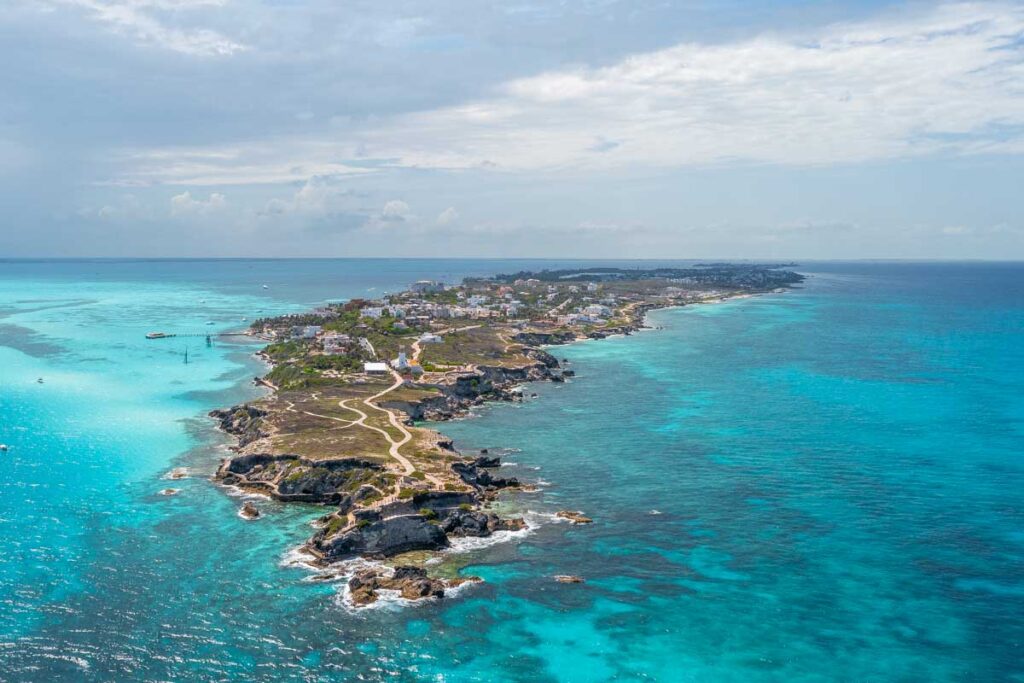 The small size of the island allows you to get around it during the day. Although, it is better to use land transport. On the shore, you can enjoy stunning sea views and admire fantastic sunsets, which are distinguished by their amazing beauty and unique palette of shades.

Of course, the list of entertainment on the island is not limited to this. You can take a leisurely stroll on foot, rent a golf cart, sunbathe or go for a walk to local attractions. Here everyone can find something to their liking. 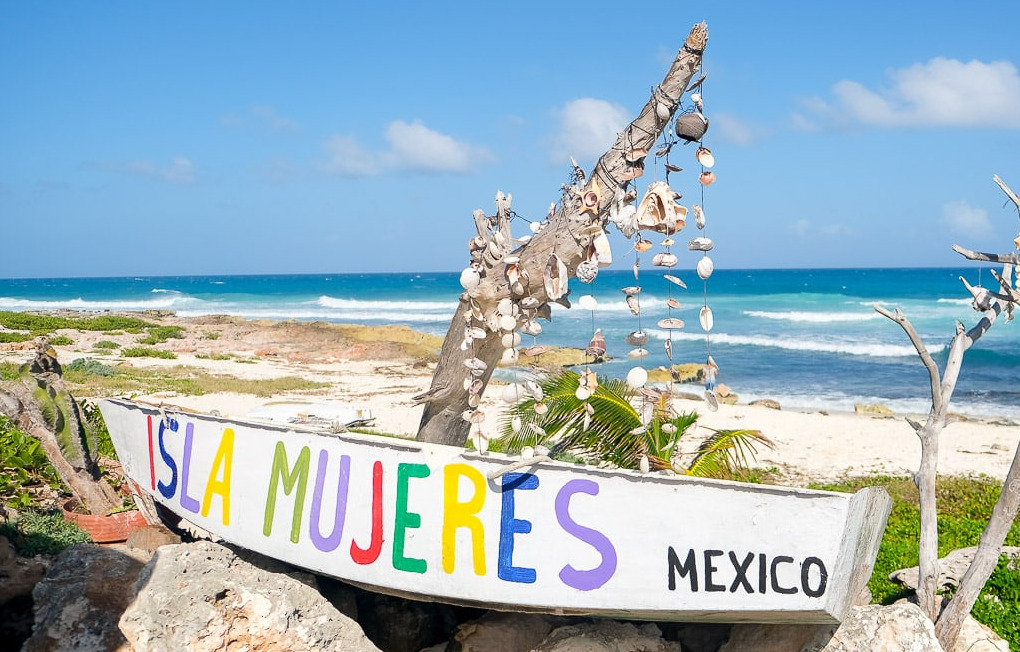 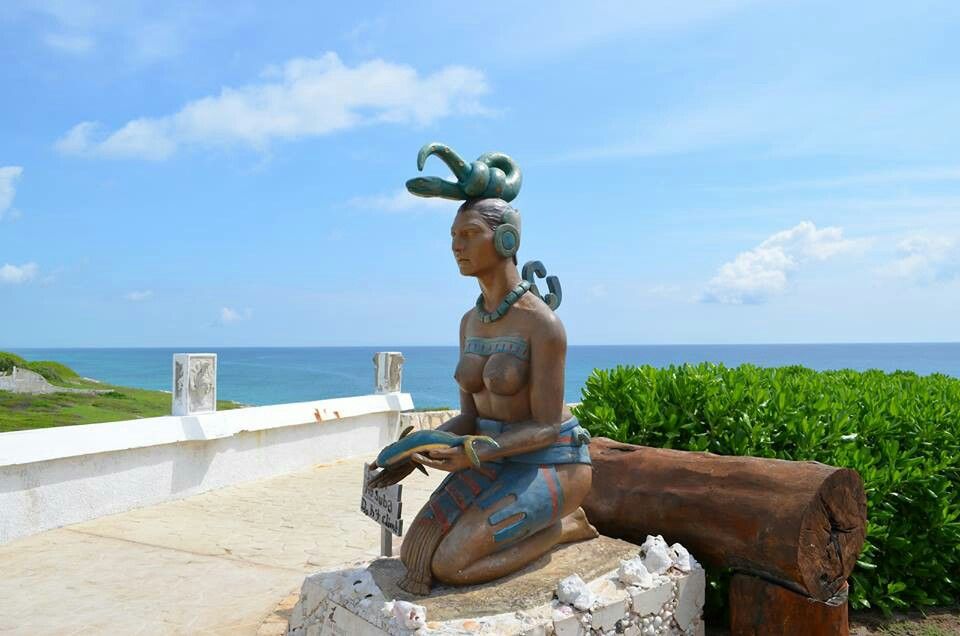 The oldest temple is located on the southern cape. Even though it was badly damaged during the 1988 hurricane, part of the ancient wall and foundation have been preserved on the territory of the complex. According to tradition, on New Year’s Eve, local women bring gifts and donations to the goddess Ixchel, the patroness of fertility, health, and rainbows.

Tortugranja is a state turtle reserve, which will be interesting to visit not only for adult travelers but also for children.

In the nursery, there are not only turtles but also other marine inhabitants who need help. The incubator helps in the rehabilitation of sick and injured animals, after which they are released into the wild. By desire, guests can feed the turtles and even participate in an interesting «liberation ceremony». 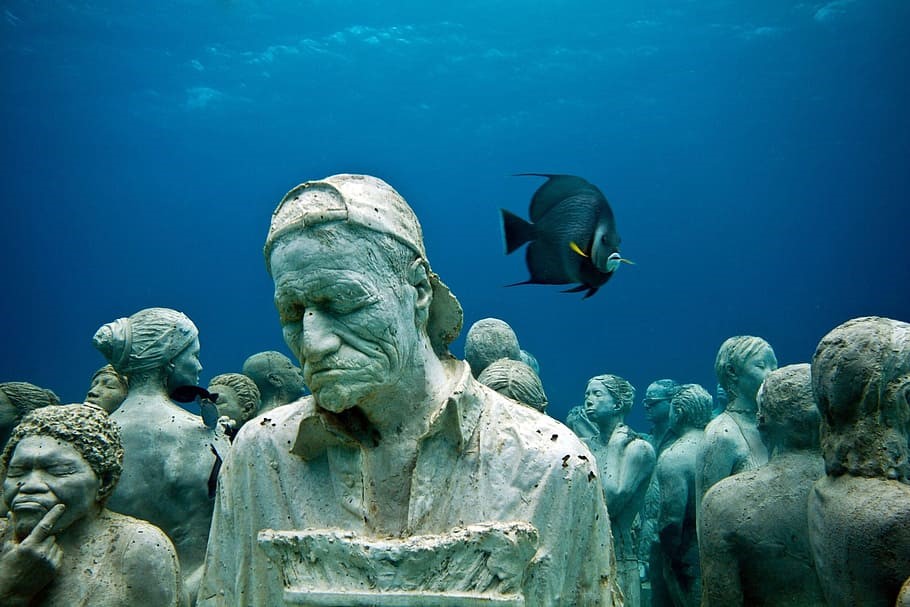 On Isla Mujeres, you can visit the most unusual museum in the world. You definitely heard about him or saw photos. Underwater sculptures are on display near the Manchones reef. Those who wish can dive under the water using special diving equipment.

At a depth of approx. 30 ft, there are 473 sculptures, which are included in the largest composition «Evolution».

The human figures are life-sized and have the faces of real people. 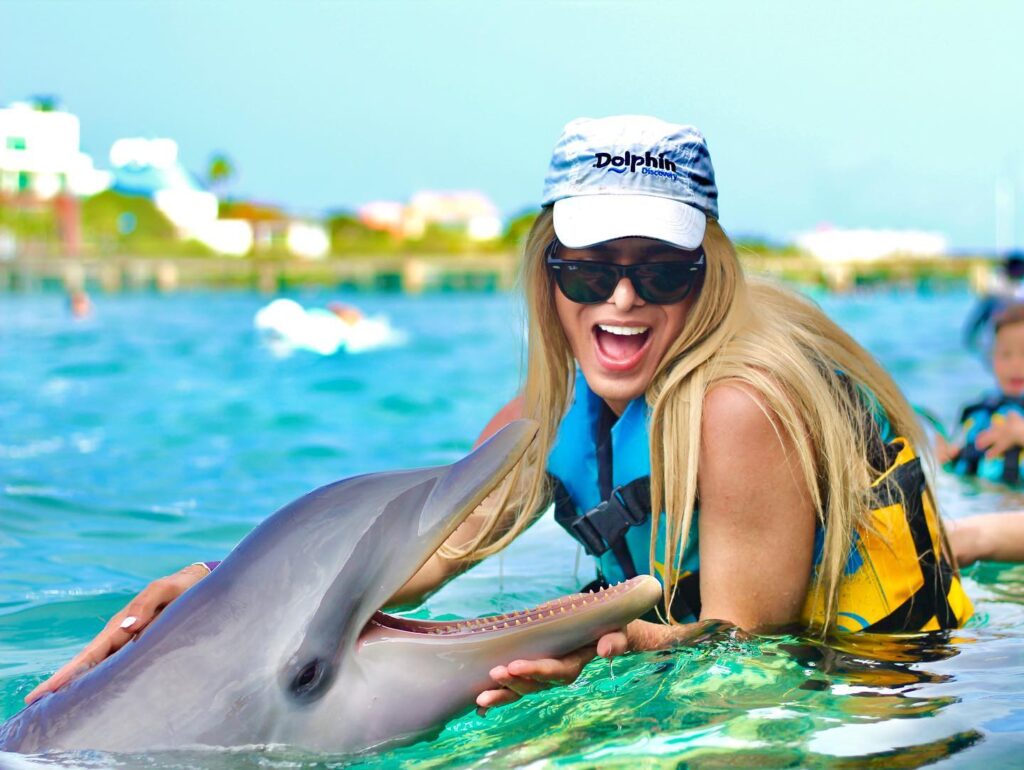 Swim with dolphins, sharks, and other marine life at the theme park, located in the heart of the West Coast. In a specially equipped bay, tourists can stroke and feed the animals. The photo session is a must!

In summer, the largest fish in the world, whale sharks, migrate past the coast of Mexico.

It is to this long-term event (from May to September) that a solemn holiday is dedicated – the Whale Shark Festival celebrated in July (migration peak) on Isla Mujeres. 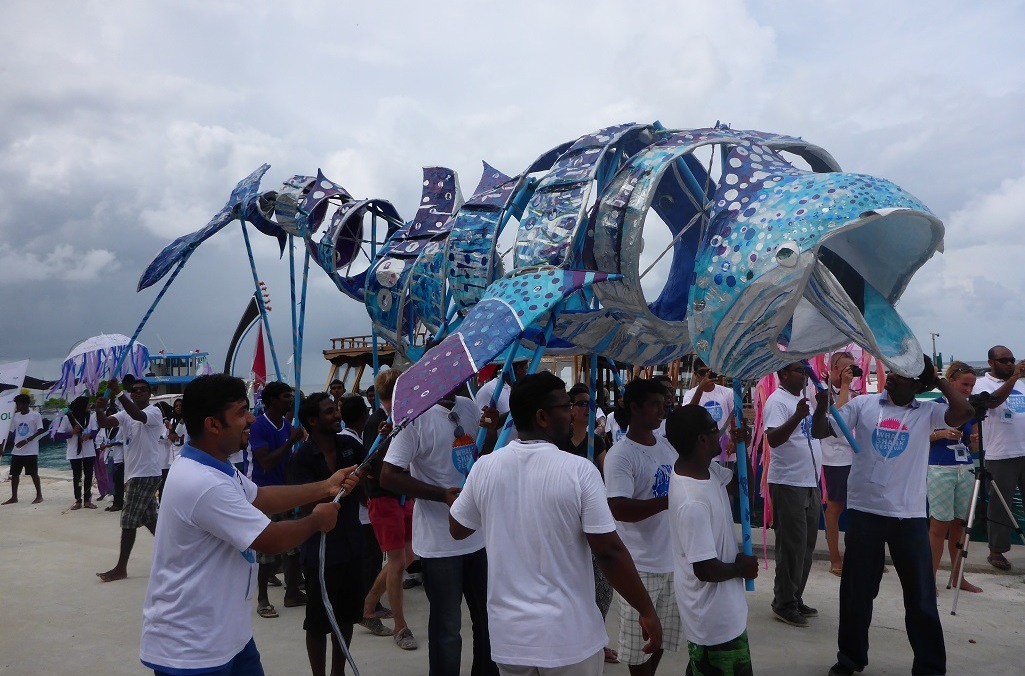 Of course, this is not the whole festival program of the island. It will be difficult for us to convey even a small part of it, but rest assured, every weekend something happens here. Salsa championships, jalapeno eating competitions – you will definitely be dragged into some kind of fun adventure.

In the Caribbean, these places are considered the most flawless for amateur and professional fishing all year round. 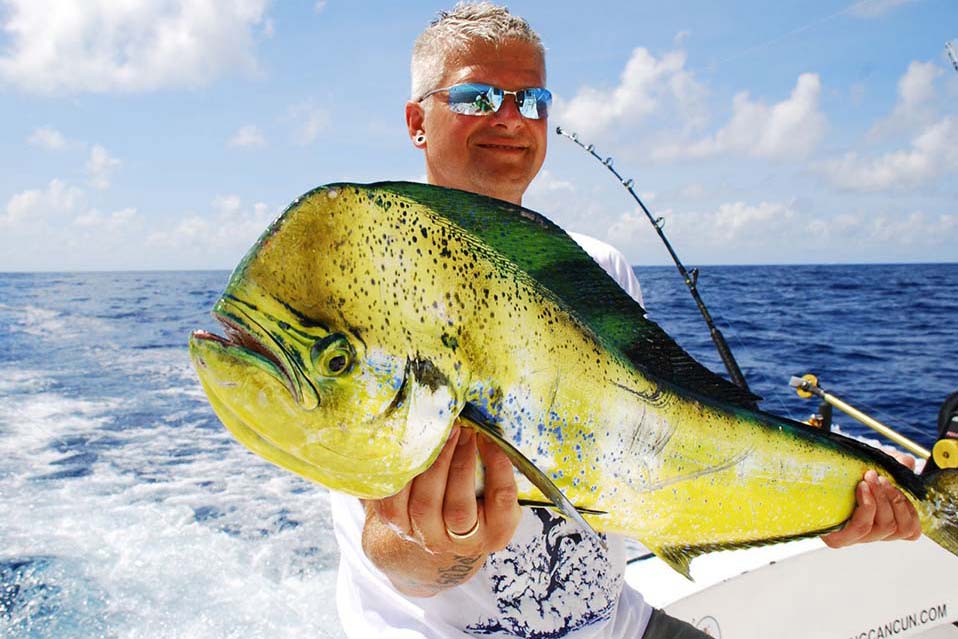 We recommend going on an exciting tour on a yacht, boat, or catamaran equipped with special professional equipment for fishermen. During a walk to Isla Mujeres, at the request, the ship can stop near the reefs, in the lagoon, and in other places suitable for fishing.

You can book fishing off the coast of Isla Mujeres, either while in Cancun or directly on the island.

The cost of such fishing trips start at an average of $120. Of course, do not take such a tour if you are not a big fan of fishing.

Of course you will have an assistant, but it is worth realizing that the sea fish is very heavy and strong, and to fight such an opponent you need a lot of strength. The average weight of a barracuda, for example, can exceed 20 pounds. Add to this its incredible strength and speed and you realize that such entertainment is not for everyone. 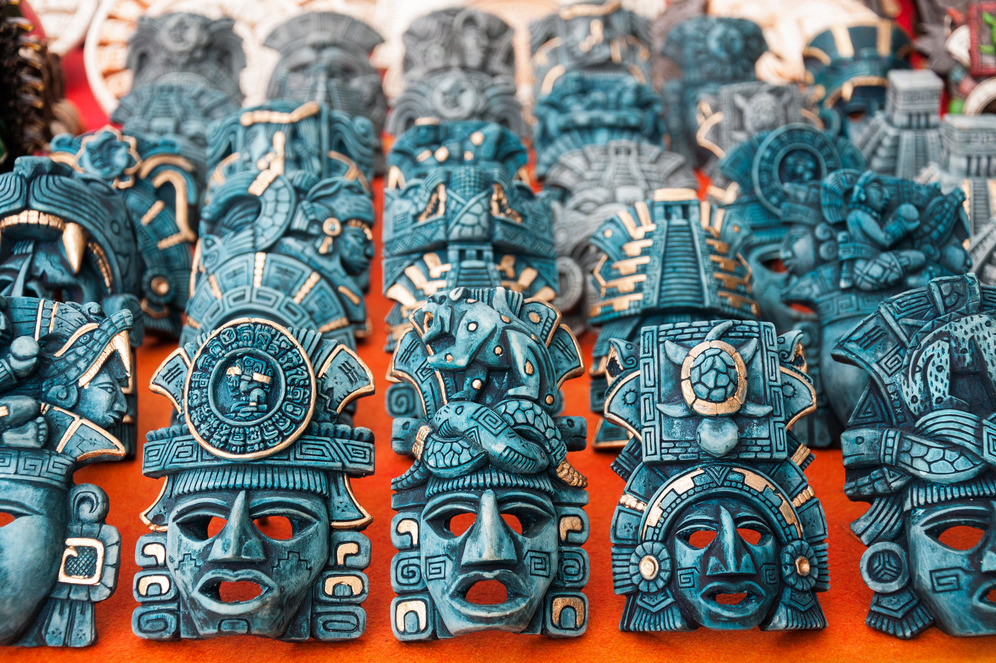 Isla Mujeres is notable for its low prices for souvenirs. Tourists from Cancun usually make purchases of this kind in the shops and souvenir shops of Isla Mujeres to cut down on vacation costs. 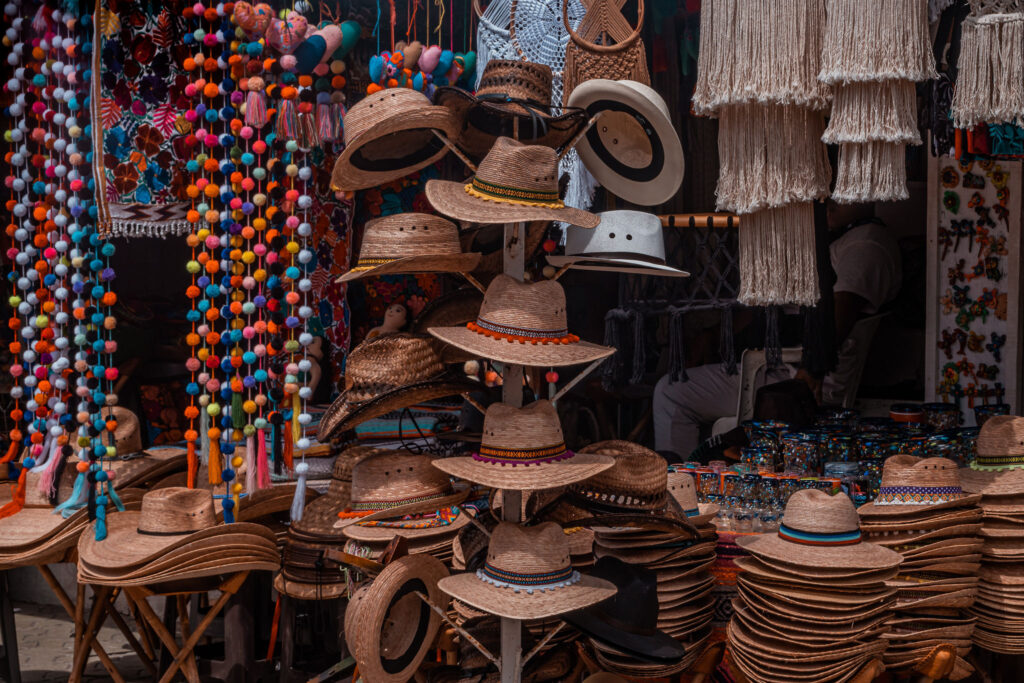 Do not forget that the prices on the island will be higher than on the mainland. This is due, above all, to logistics, because there are no industries on the island itself. And, if some authentic souvenirs can be found at an affordable price, the cost of lunch or dinner can be significantly different. Especially when it comes to expensive hotels or beach clubs. 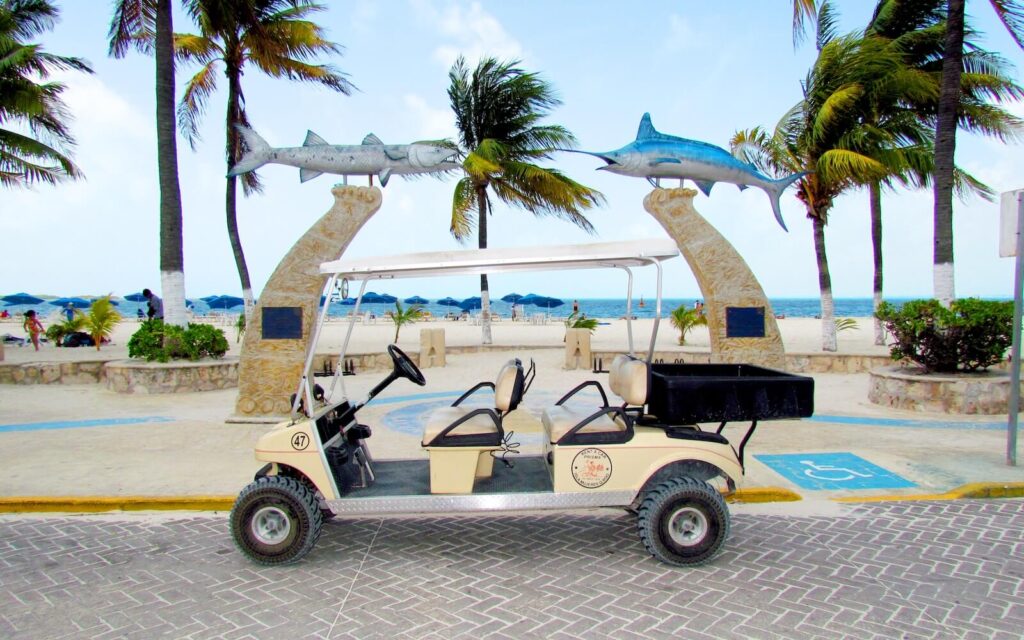 For convenient transportation around the island, a golf cart is an ideal means of transport. It can be rented for a few hours or for the whole day. Rental shops are located all over the island, so it won’t be hard to find.

Bicycles and motorbikes can also be rented upon request.

Prices for renting a golf cart are affordable and start at $50 for the whole day. 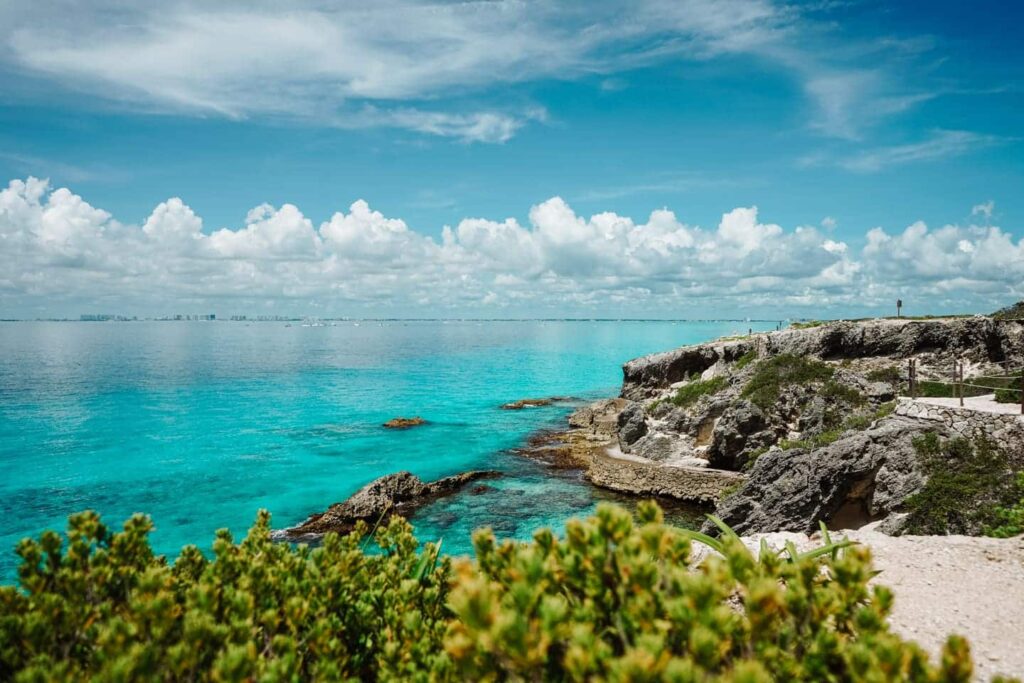 To summarize: you can come to Isla Mujeres for a day just to spend time on one of the wonderful local beaches. You can combine a beach vacation with a golf cart tour of local attractions. You can dedicate your trip to exploring the local reefs with snorkeling, or take a full scuba diving tour. Or perhaps you want to rent a villa to have a small pool party with friends and then enjoy a barbecue overlooking the stunning sunset over Cancun. Either way, there are enough activities to suit all tastes. 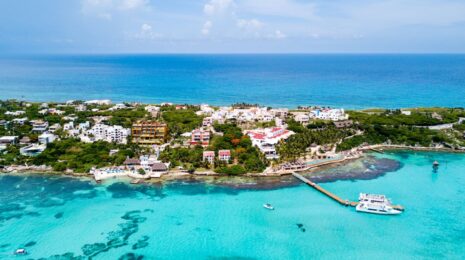 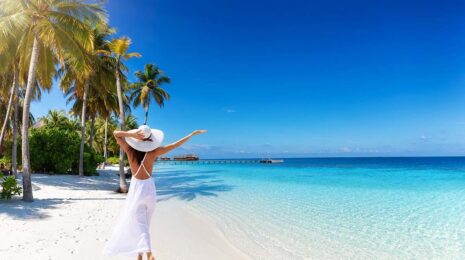 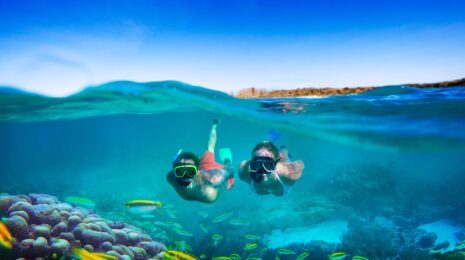