Carnivals in the state of Morelos in 2023

Every year  many states in Mexico hold carnival celebrations. There are at least 200 cities and towns. Each locality celebrates in its own way: some have lavish celebrations with a huge number of participants (e.g., Mazatlan, Veracruz), while others try to make a small celebration, but in a traditional style or come up with something unique (for example, in the cities of Morelos state).

If your vacation in Morelos is during the period of carnival festivities, then go to one of the port cities to be part of the event and have a good time. 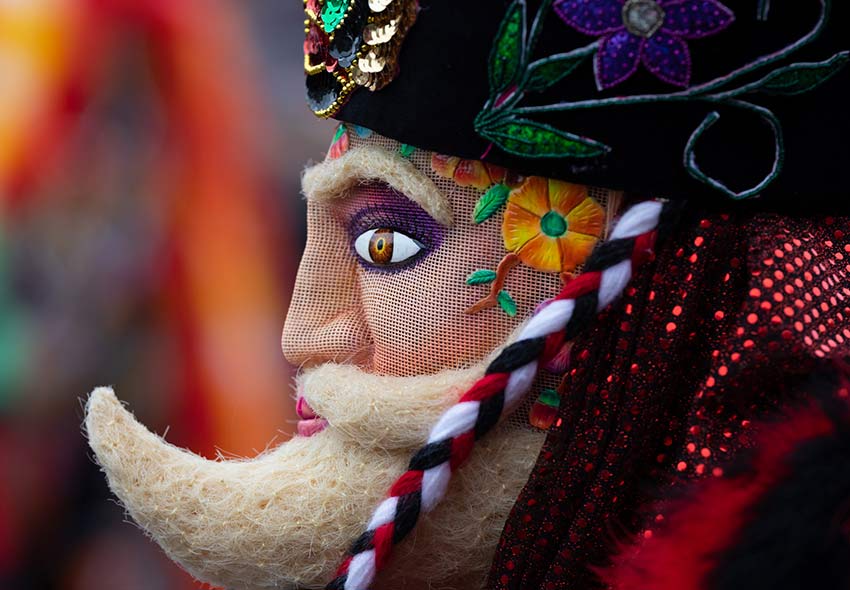 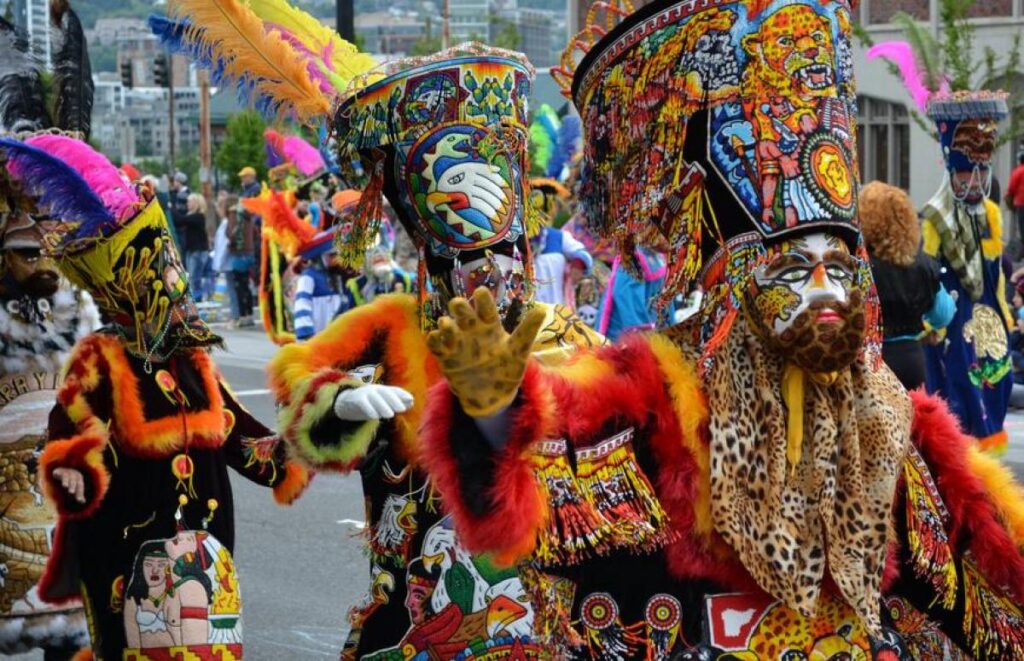 What cities in the state have carnivals?

The modern carnival celebrations held in Morelos are very similar to each other. They have their own flavor, but show a mixture of classic festivities with local traditions and beliefs.

The fun in the state of Morelos begins from the end of January until the arrival of spring with various carnivals in the following localities: Cuernavaca, Yautepepec, Tepostlán, Jiutepec, Atlatlaucan, Ahochiapan.

1.Carnival in Cuernavaca in 2023: traditions, place and time 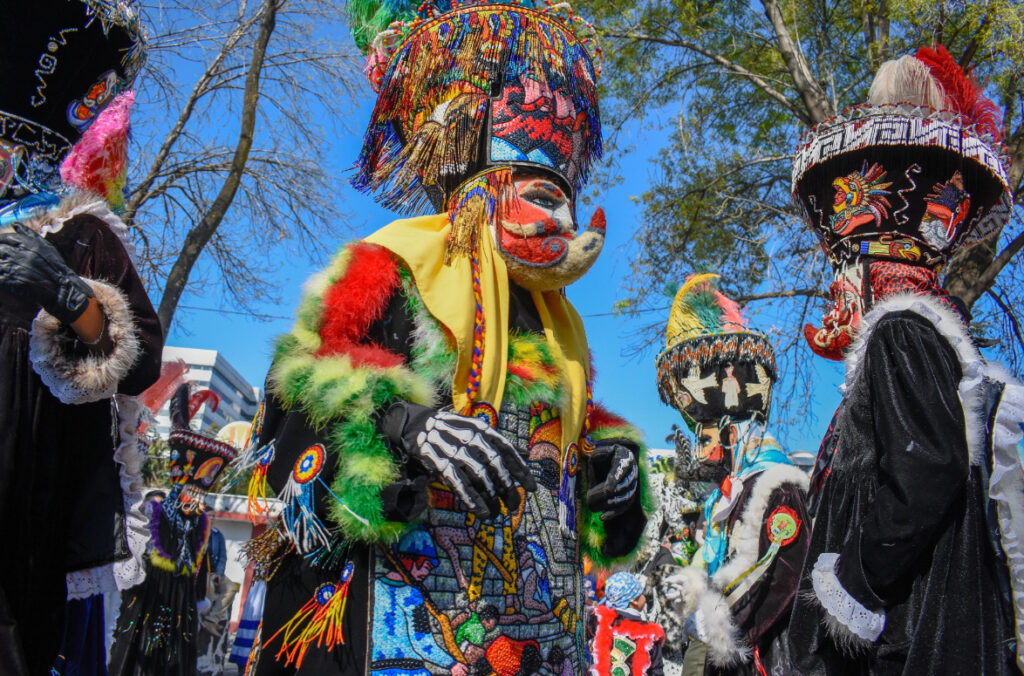 The city of Cuernavaca is the regional capital, popularly referred to as the «City of Perpetual Spring». Here one of the famous carnivals in the whole state takes place.

The Carnival in Cuernavaca is a long-standing tradition that only became official in 1965. Before that time, the city held a mass event with the then famous Huehuechis dance group. The young people who were part of the group put on their old clothes and boots, covered their faces with colorful pieces of cloth, and then went out into the streets of the city and danced. The locals always greeted them cheerfully: whistles, shouts, and applause could be heard throughout the neighborhood.

Over time, the event in this format spread to other municipalities. People tried to do something new: they wore masks, invented various costumes, glued beards and even long moustaches. As a result, the dance, which originated in the city of Cuernavaca, got the name – «Chinelo» (translated from the Nahuatl language «movement of the hip»). Today, this dance can be seen not only during carnival celebrations, but also on other holidays celebrated in the state of Morelos, such as: Day of the Dead, Saint’s Days of San Isidoro, San Antonio, San Lorenzo, Easter, and the Spring Flower Fair.

Carnival is a Christian tradition, so in Cuernavaca it is held almost a week before Ash Wednesday, that is, from Thursday to Tuesday (inclusive). The day after the carnival ends, Catholics have Ash Wednesday. On this day they go to church, receive ashes, and Lent begins. This is why people personify the feast days in the city with a «last chance» to dip into all the pleasures of worldly life.

At the beginning of carnival week, the «bad moods» are burned in the city. It is customary to create a huge scarecrow for this purpose, which represents the problems and worries of everyday life. Locals have honored this tradition year after year. After the ritual is performed, everyone begins to celebrate. 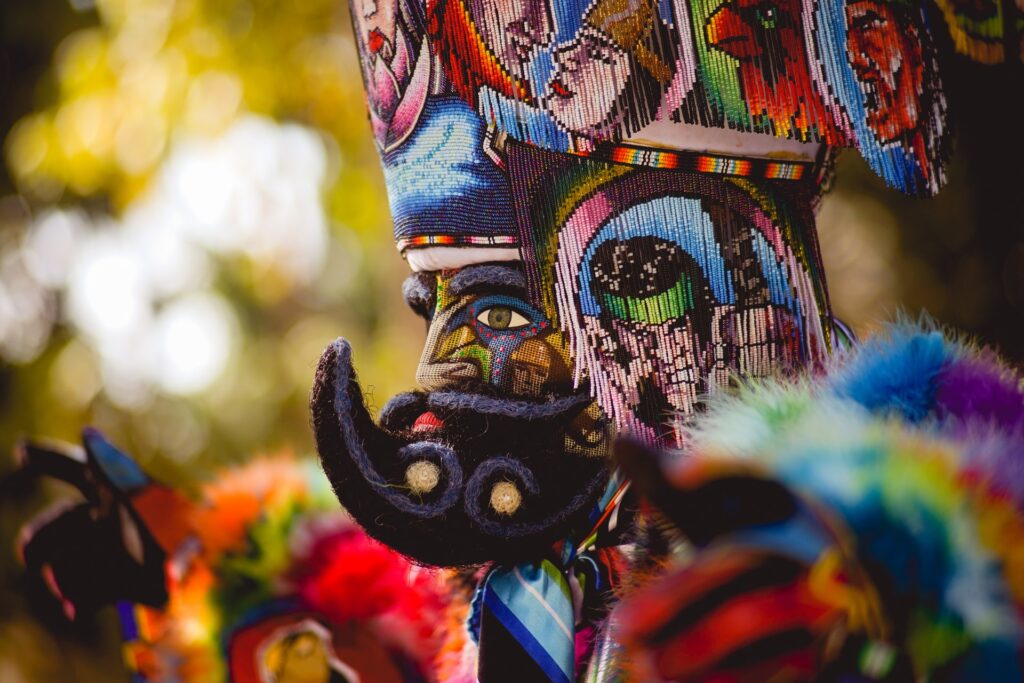 The most anticipated and eagerly awaited part of the whole carnival is the Chinelos dance.

It is usually performed during the weekend. In the central square of the Plaza de Armas, the dancers gather in traditional costumes. They wear masks on their faces with long beards attached. The group moves to the music of wind instruments and the loud sound of drums. It should be noted that the dance continues as long as the orchestra is playing. One dancer succeeds another. The ritual movements of the young people are very similar to the movements and jumps of the marionettes: they make several shuffling steps (with the dancers’ feet spread and knees slightly bent), lead with one shoulder, then the other and make a small jump to the right or to the left side.

Interesting fact: In the Palacio Hernan Cortes there is a mannequin dressed as a true 19th century Chinelos. The traditional costume consists of 4 main elements: a flowing floor-length dress made of velvet fabric, a large hat with multicolored feathers (three of them: white, red and orange), a mask and gloves.

The city, unfortunately, does not hold too many events during carnival week, as they do in Veracruz or Mazatlán, but the official closing of carnival on Tuesday is an integral part of it. On this day, people burn another prepared effigy, which they believe represents the unbridled merriment and debauchery present during carnival days. This is why the ritual itself marks not only the end of the festivities, but also the return to abstinence.

2.Jautepec Carnival: Traditions, what to expect in 2023

The town of Jautepec is rich in national traditions and festivals of all kinds. The most eagerly awaited holiday of the year is Carnival, which is held in spring (dates are not fixed).

Carnival festivities in Jautepec begin with a ritual to get rid of the so-called «bad mood». It represents a coffin with a «bad mood» inside, which is set on fire and then thrown into the river, so that such a mood will never appear during the festivities, neither for locals nor for visitors. If we talk about the carnival procession, it is usually opened by preschoolers and students of various schools in brightly colored costumes.

No less fascinating during the carnival is the parade of the widows of Juan Carnival. It involves only men who disguise themselves as women. The main goal of each is to reincarnate so well that it is impossible to tell who it is: a man or a woman. The winner of this contest receives a cash prize after the results are tallied. 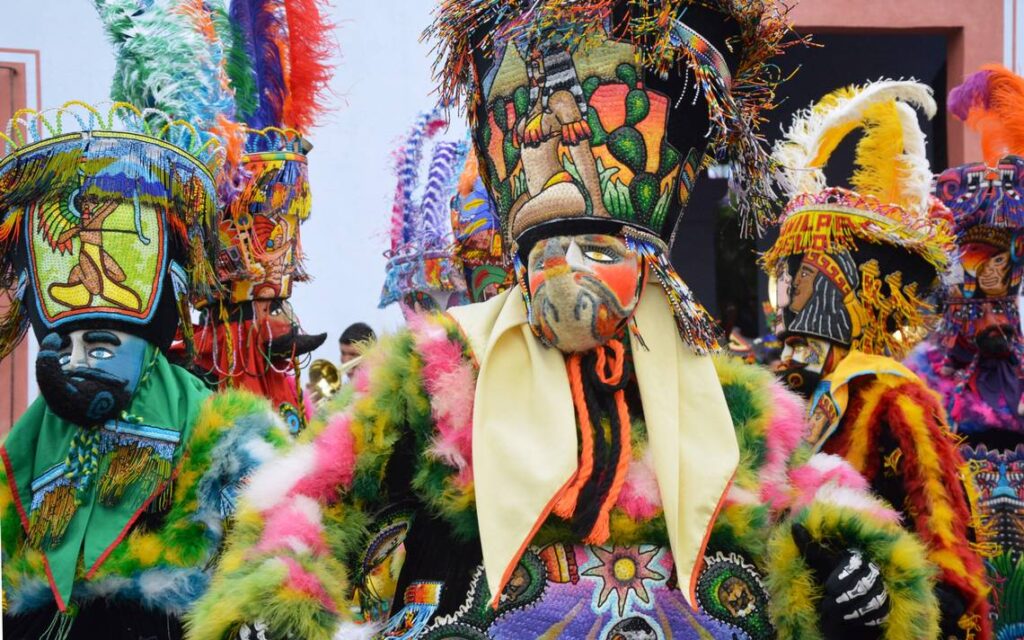 Also in Jautepec we can see the coronation of the carnival queen, the famous «Brinco del Chinelo» dance (young people in bright and richly decorated clothes participate, their faces masked with a protruding chin), which is performed to the merry tunes of the local brass bands, and a large variety of games, performances in the folk theater.

On the main streets of the city during the holidays there are stalls and kiosks selling handicrafts (piggy banks, figurines, dishes), food (tamales, cured meat, cheese and other delicacies) and beer.

Interesting fact: Every year at the carnival in Jautepec, various popular artists perform: Julio Preciado and his band Campeche Show, the band Merenglass, the band el Ocotito and others.

The event that marks the imminent start of the carnival in Tepostlán is a fundraiser for local residents.

It is usually held a few weeks before the beginning of the celebration. Money is not just asked for, it is earned by singing and dancing in front of people in the streets. All funds are then used for carnival costumes and other needs.

The main event of the carnival festivities in Tepoztlán is the «Brinco del Chinelo» dance. It humorously portrays the Spaniards who in the distant past came to conquer the territories of Mexico. The difference between this carnival and others is that in the carnival procession, in addition to the dancers dressed as chinelos, there is a chinelo who dances at the head to the sound of flutes. Also there is a troupe that walks behind everyone and carries flags on which animals are painted in oil paints. Each animal represents a different district of the city of Tepoztlan. 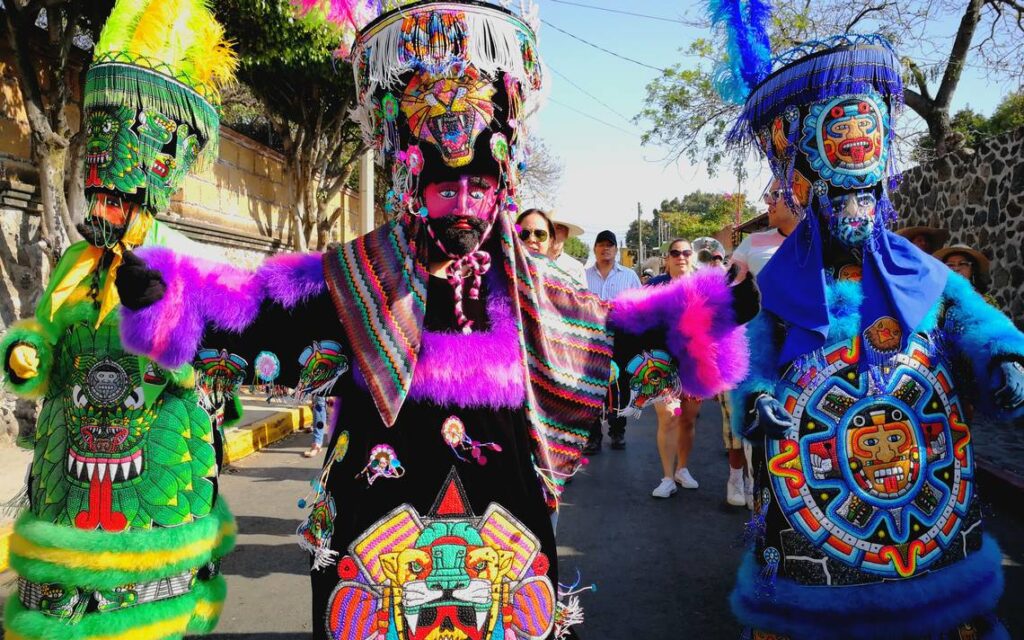 An interesting fact: all the costumes for the Brinco del Chinelo dance are handmade by the locals.

Participating in the Tepostlán Carnival is a great option for tourists. Here you can appreciate the Mexican traditions and the inherent multicultural style of the city.

4.Jiutepec Carnival in 2023: How and when it will be celebrated

Jiutepec is one of the cities of the state of Morelos, which also hosts an annual carnival (in the second half of January).

The main events of the carnival:

In addition, the Teatro del Pueblo offers musical shows for a fee, which everyone can attend. The organizers of the carnival in Jiutepec try to make sure that only famous artists (regional level) take part in the show every year. 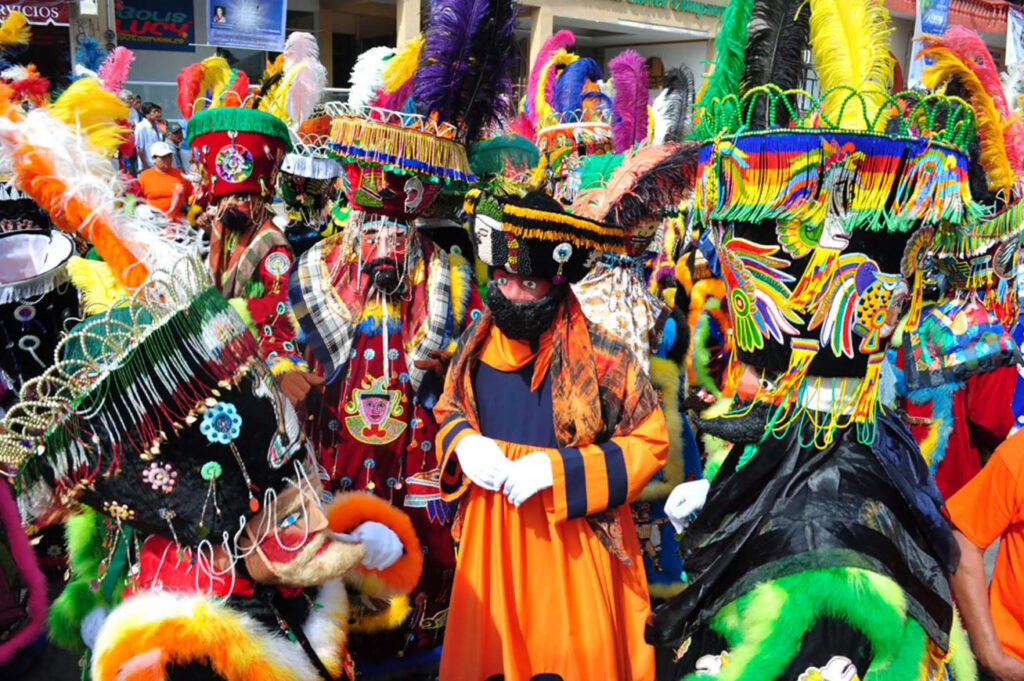